As a kid, I do remember having a fear of the dark.  I had a special Donald Duck night light (it didn’t quack though) that I suppose was put in place to protect me against whatever I was fearful of.  Problem is, I wasn’t really afraid of anything in particular.  And certainly not a manipulative vengeful spirit with a rare skin disorder that survives in the dark named Diana.

Time to stock up on flashlights and candles everyone – because the horror movie Lights Out has been released and if you’re sensitive to creepy things in the darkness, you might be in trouble!  For those living in the dark (pun #1 for those counting at home), Lights Out is based off of a short from 2013 directed by David Sandberg.  It was about as effective as an ‘under 3 minute short’ could be, and it was only a matter of time before it became a feature film.  Good news is that Sandberg directs the bigger version as well!  Before we get on with the review, take a moment if you want and watch the original below:

I do have some good news for fans of the actress in the short (Lotta Losten), because she appears in the new version with a nice little cameo at the beginning.  Speaking of the beginning of the movie, we see Paul (Billy Burke) talking to his little son Martin (Gabriel Bateman) on video chat while at work.  Martin tells his Dad that he’s worried about his Mom – that she is talking to herself again and acting strange.  He tries to reassure his son that everything will be ok and he’ll be home soon.  As Martin begins to leave work, he sees a dark figure in the shadows ahead.  Is it in his mind?  Is it real?  Whatever the case, it doesn’t like the light – so when total darkness takes over the office, Martin is killed.

With her husband now dead, and the fact that she was already starting to lose it mentally, Sophie (Maria Bello) is now really starting to short circuit (pun #2).  She can’t seem to control her son and freaks him out to the point where he can’t sleep and nods off in school.  Enter in his goth/metal music loving half-sister Rebecca (played by Teresa Palmer of Warm Bodies fame) to save the day!  Turns out, she left home because she couldn’t take the manic behavior of her mother after her father disappeared years back (Rebecca and Martin have different fathers if this is confusing).  So recently she’s been distant with her mother and with Martin, and seems to have issues of commitment in general as evident by her relationship with her “boyfriend”.

Rebecca doesn’t really think much of Martin’s behavior until he mentions the name Diana.  This makes Rebecca’s memory turn on like a light switch (pun #3) to a time when she was younger and had her own encounter with Diana.  Turns out, Diana was a real person who befriended her Mom in a mental hospital when they were younger.  Diana had a rare skin disorder where she couldn’t be exposed to light.  During some risky testing at the facility, Diana died, but doesn’t exactly seem to be gone.  She’s basically feeding off of Sophie’s mental condition and only exists because of her.  We’re one step away from a very weird version of Fatal Attraction here. 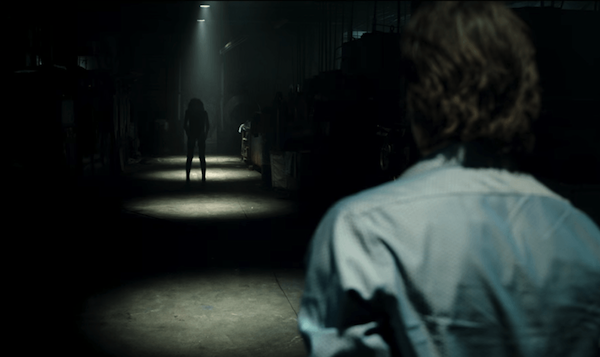 From there on, Rebecca and Martin (along with her neglected boyfriend) try and figure out as much as they can about Diana and how to stop her.  It doesn’t take Thomas Edison (he invented the lightbulb, so that could be considered pun #4) to realize that the key to Diana’s existence and hopeful demise lies with their mother, Sophie.

Let’s start with some positives for Lights Out:  It’s a very quick, lean movie clocking in at a little over 80 minutes.  That works to it’s benefit, because the script and story are lacking.  This movie did get me to jump a few times, so there’s another positive.  The way that director David Sandberg used the lighting and darkness to the movie’s advantage was creepily effective.  Lights Out looks great, and for the most part I noticed practical effects were used – especially on Diana.

The acting across the board was strong (although Martin got on my nerves a little), with Teresa Palmer bringing the goods as Rebecca.  Doesn’t hurt that she looked really good and was into metal too.  Maria Bello is always on point, so no big surprises there. 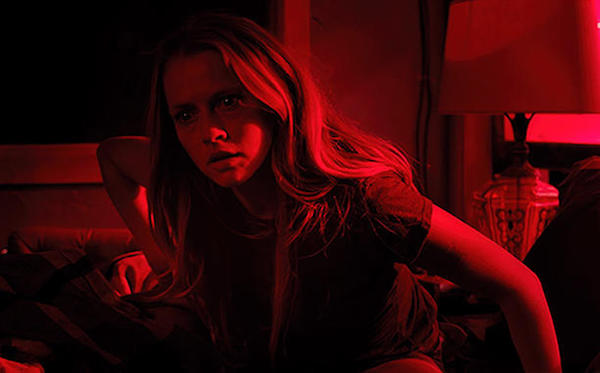 The main negative that I had with Lights Out was with the story and script.  Granted, those involved did what they could to turn a 3 minute short into a full movie – but it was evident that they struggled to even get to the 80 minute runtime.  When everything fell into place about Diana’s past and existence, it was mildly eye-rolling to say the least.  It reminded me of how I felt about the story in the movie Mirrors.  I felt there could have been more here with Lights Out, and a better way to utilize the storyline of someone (or something) that can only survive in the dark.  And the ending of the movie really blew a fuse (pun #5).  My other beef was with the music.  Sometimes a scene can benefit from no music at all in a horror movie.  And I felt they dropped the ball here with that and used music when they necessarily didn’t have to.

But, when the lights came up in the theater, I was thankful because if Diana was there then I could escape.  But also, I had an overall good feeling about my experience with Lights Out.  Nothing blew my mind, but it was creepy and definitely might make me think twice when I shut my lights off tonight at home.  Anyone know where I can get a Donald Duck night light circa 1981?