Anthology films are like a box of chocolates…..you never know what you’re going to get. Unless of course you are eating a box of chocolates that has that little guide on it to show you what you’re going to get.  But anyway, anthology films (specifically horror movies) can be hit-or-miss.  Creepshow will forever be my favorite, but more recently the VHS franchise was the definition of being hit-or-miss as far as anthologies go.  Now comes along XX:  Four tales all directed by women that are intertwined with creepy stop-motion animation.  Will these gals go 4 for 4 or are we entering more hit-or-miss territory here? My money is on the latter unfortunately.

I guess the easiest way to break this down would be to dissect each film on it’s own: 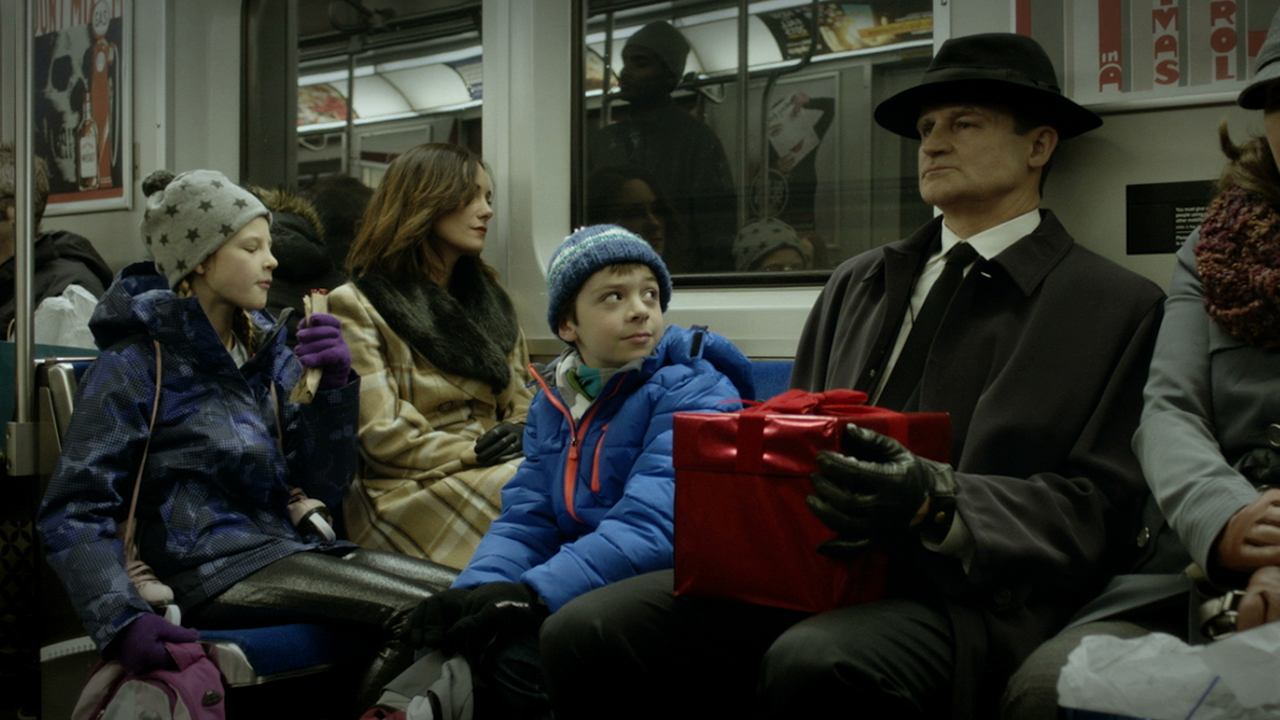 Not to be confused with the 2009 film staring Cameron Diaz (which is kind of underrated btw), this short opens up with a mother (Susan) and her son (Danny) and daughter (Jenny) riding a train.  Also riding that train is a creepy guy in a hat with a big red box on his lap. Danny gets nosy and wants to know what’s inside.  The creepy guy obliges and shows him, provoking a look of fear on the little boy’s face.  After that, Danny loses his appetite. Literally.  Like for days.  His parents are concerned and take him to the doctor, but the doctor has no advice other than that he needs to eat.  While Susan and her husband Robert try to figure out what’s happening, Danny whispers something in his sister’s ear. And now – you guessed it – she doesn’t want to eat.  And then he whispers in his father’s ear and……well, you can see the pattern.

I will admit, I liked the setup of The Box – and it had me intrigued up until the final 5 minutes (granted, most of these shorts are 20 minutes or less).  Director Jovanka Vuckovic seems to have an idea of where she wants to go, but just didn’t ever arrive at that destination.  Once the monologue from Susan started towards the end, it lost me.  I’m all for an ambiguous ending that leaves me contemplating what happened, but this seemed like a cheap way out in my opinion.  A+ for the initial setup, but a C- for the final execution. 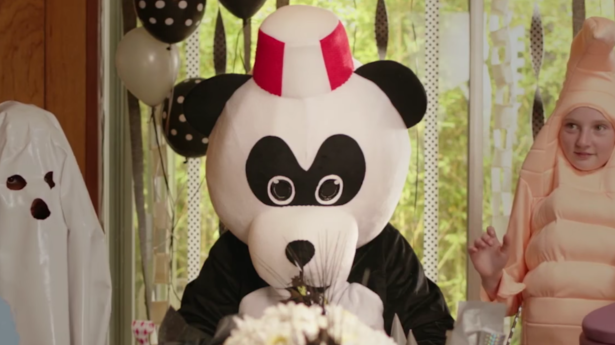 Birthday parties can be fun!  Unless of course you’re trying to cover up the fact that the father of the little birthday girl is found dead in his office before the party even starts.  Enter in Annie Clark’s (better known as singer/songwriter St. Vincent) amusing and slightly twisted tale of Mary:  The mother who must now hide her dead husband’s body from her daughter and all of the other partygoers.

Style and substance are both on display in The Birthday Party.  Not much in the way of ‘horror’ is going on here, but what is going on is a fun little torrid story about how far a mother will go to make sure her child has a memorable birthday.  And I’m sure everything goes off without a hitch, right?  Sarcasm.  Kudos to Annie Clark for trying something different and kudos to that rapping panda. 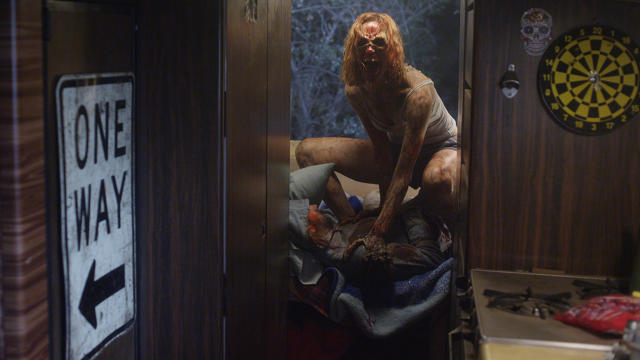 Now I hate to be a Debbie Downer, but we’ve come to my least favorite story of the bunch. What happens when four friends go to the desert and find sketchy evil cave paintings along the way?  Hilarity ensues!  Just kidding – blood and chaos ensues, although there is some hilarity in the guise of the script and camerawork.

I’m sorry, I shouldn’t be so harsh because director/writer Roxanne Benjamin did try and bring a straight-up horror short to the table here with Don’t Fall.  So I do commend her for that.  But the overall product is too forgettable, especially when following up The Birthday Party.

Her Only Living Son 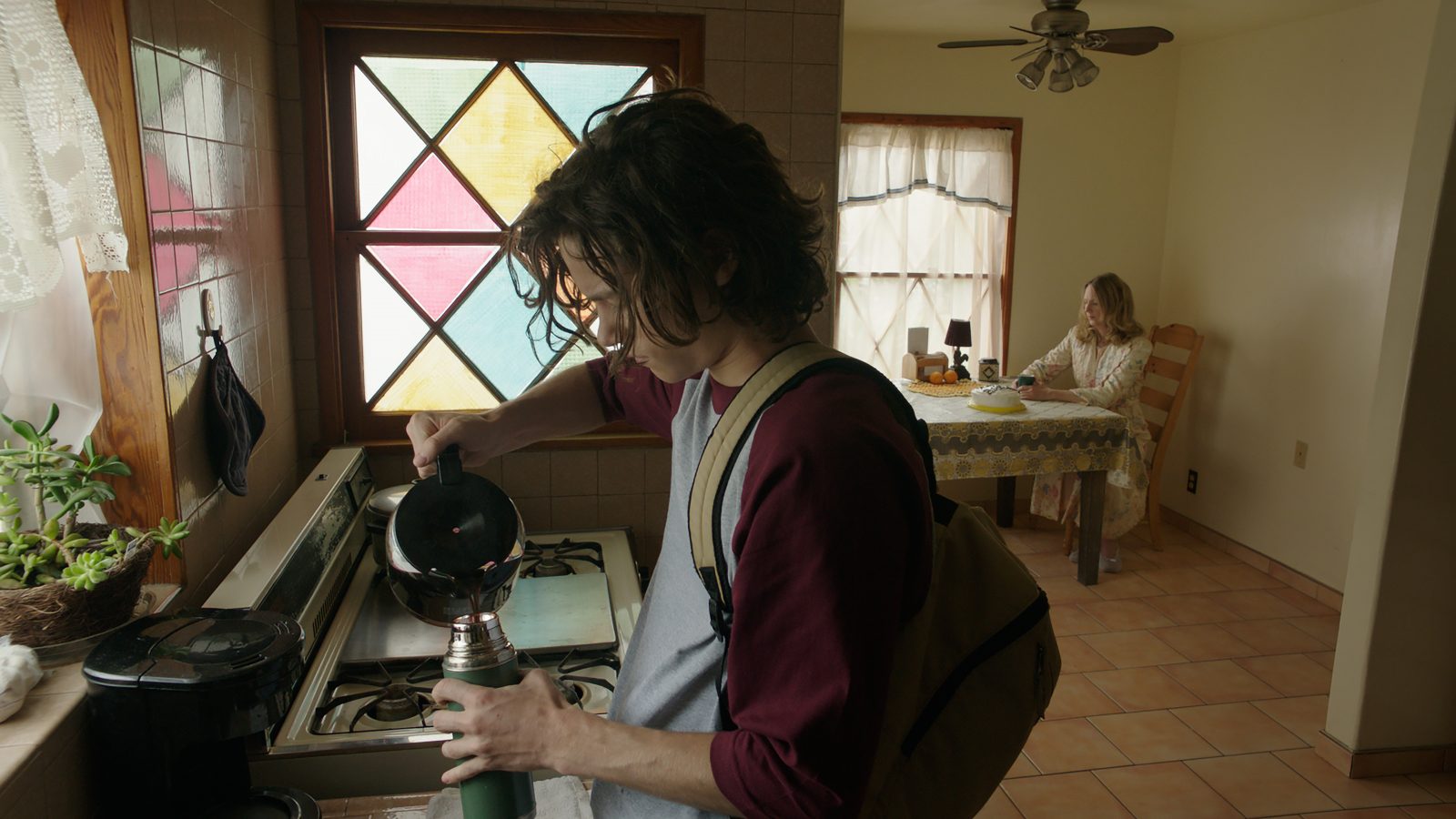 Even the lamest of anthology movies try to end on a high note.  And so far, I wouldn’t call XX lame – but it does definitely end on that high note.  Director Karyn Kusama blew me away last year with The Invitation, so it’s no surprise that her offering here called Her Only Living Son is the best of the bunch.

Cora’s son Andy is about to turn 18.  It’s a monumental age for any young boy, but it is especially monumental for Andy because he’s about to become a man.  A man with extremely long finger and toenails that enjoys torturing kids at school, but a man nonetheless.  Her Only Living Son boasts the longest runtime in the anthology, but with good reason.  It needs that time to actually flesh out a story (something the previous three didn’t do all that well), and proves to have a devil of a time going through that process (wink wink).  In the end, Kusama proves she’s ready for her next full length feature – as this story left me definitely wanting more.  It’s sweet.  It’s creepy.  And it’s just damn near perfect.

So at the end of the day, what I’m left with in regards to XX is definitely a hit-or-miss scenario.  Karyn Kusama and Annie Clarke delivered the goods, while the other two directors seemed to have trouble finding their footing as far as their contribution here.  As mentioned at the top, I loved the hypnotic stop-motion animation that broke up the stories and could honestly watch a whole movie based on that alone.  XX delivered on some levels, but on others it faltered.  A bit disappointing, but overall a nice effort that left me wanting more regarding The Birthday Party and Her Only Living Son.