Can I get my crow barbecued, please?  Yeah – I’m eating crow now because I poo-pooed the new remake/reboot of Child’s Play before it opened this past weekend.  Actually, I kind of dug the first trailer and had an open mind.  And when Mark Hamill was announced as the voice of Chucky (aka Buddi), my mind was even more open.  Then the second trailer dropped and I had doubts, at which point the poo-pooing began.  Next were the ads of Chucky destroying various Toy Story characters (that movie opened the same weekend), which seemed like ‘desperation time’ for me.  But…..low and behold – Child’s Play was actually (gulp) GOOD.

Before I get into the meat of the new Child’s Play story and my thoughts, I will say that as a whole I dig the original Child’s Play franchise.  Chucky became a horror icon, mostly due to the voice work from Brad Dourif (and the doll’s overall look).  But let’s be real – none of the original movies were classics.  They were fun, but as the franchise progressed they got more ridiculous (much like the Nightmare On Elm Street franchise).  So having said all of that – the new Child’s Play does just what a remake should do…..put it’s own spin/stamp on the franchise name and make it it’s own.  Even if that means changing Chucky’s appearance – and in this case, for the better if we’re going for the more creepy vibe.  Gone as well is the ‘Good Guys’ moniker, being replaced by the more simplistic ‘Buddi’. 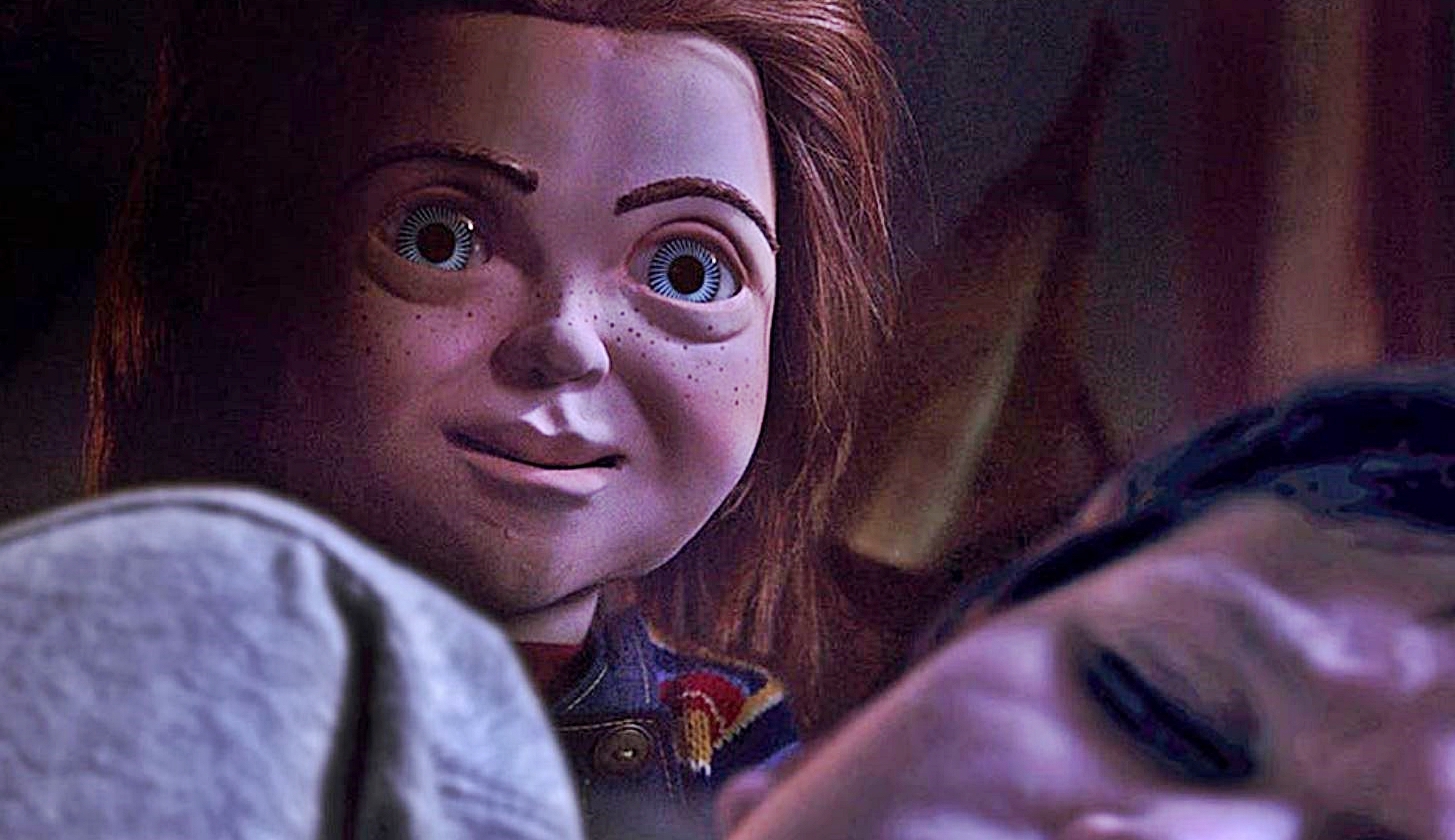 Also kaput are the voodoo storylines of Chucky’s body being inhabited by a serial killer.  Instead we get a ‘modern’ version with Chucky being an A.I. robotic version that can be charged with a USB cord and controlled through a phone app.  But how does he become evil then, you ask?  Easy.  A disgruntled employee in Vietnam fiddles with the program and turns off all of his safety features of the one Buddi doll he’s working on!  It happens every day.  Enter in our new Andy Barclay (Gabriel Bateman) and his mom Karen (Aubrey Plaza).  Andy is a bit of a loner, succumb to the power of his smartphone and doesn’t really have any friends.  Karen works at a department store and low and behold, she happens to get Andy his very own Buddi after someone returns it to the store because it ‘wasn’t working right’.   Hint Hint…..it’s the doll that was tampered with.

At first Andy isn’t impressed with his Buddi.  He wants to call it Han Solo, but Buddi quickly corrects him and says his name is Chucky!  Nice Star Wars nod btw since Chucky is now voiced by Luke Skywalker himself (Mark Hamill).  The good news is that Andy now has a friend!  The bad news is that Chucky almost kills Andy’s cat after it scratches him – vowing to protect Andy at all costs.  Chucky even plays a fun little practical joke on Karen’s boyfriend that Andy thinks is an asshole (his words, not mine).  With Andy’s newfound robotic friend, he has more confidence to hang out with other fellow kids like Pugg (Ty Consiglio) and Falyn (Beatrice Kitsos) –  and even becomes chums with Detective Mike (Brian Tyree Henry) whose Mom lives on Andy’s floor.

I suppose I don’t have to tell you that Chucky soon goes haywire (especially after watching The Texas Chainsaw Massacre 2 with Andy and his friends), and what follows are some gleefully gory shenanigans that surprisingly were not heavy on the CGI!  The film is mean-spirited at times (a little girl gets neck-wound blood spurted all over her face), but I mean that as high praise.  Chucky’s mannerisms and facial expressions had me dying for about the first 20 minutes (again, mostly practical effects), and he was genuinely creepy – as he would just sometimes sit there without talking…..staring with those big blue eyes that are embedded into his unsettling Kardashian plastic surgery inspired face. 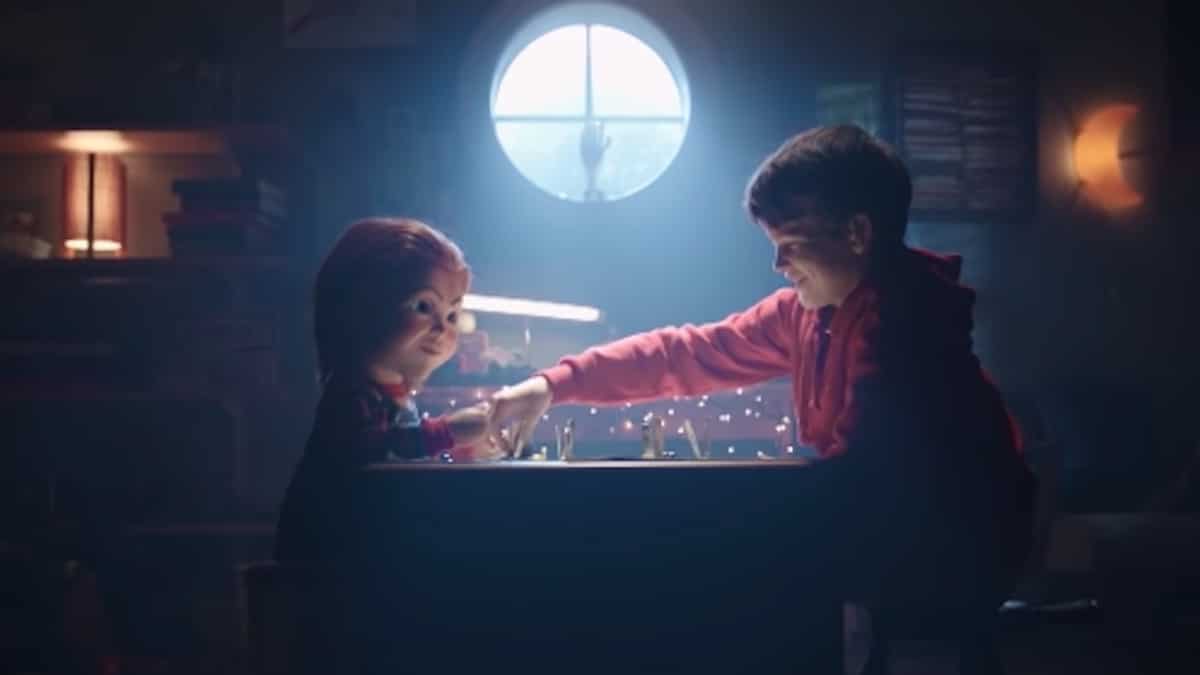 Kudos to director Lars Klevberg for the overall look of Child’s Play.  It rarely looks cheap (like some of the latter sequels in the franchise), and the plan to use mostly practical effects pays off – especially with Chucky’s movements and gestures.  Also, kudos to legendary composer Bear McCreary for a haunting and playful score that boasts ‘The Buddi Song’ sung by Mark Hamill (in the voice of Chucky of course).  I dare you to get it out of your head when you hear it.  I triple dog dare you.

Did I have any issues with Child’s Play?  Well, I guess one big one would be that it had to be associated with Child’s Play (the title, etc) at all.  I really feel they could have made a standalone movie/character about a robot A.I. doll that goes cuckoo, but then of course – the name Chucky and Child’s Play sells tickets.  Watching it though, I wasn’t ever irritated that they were using the name – because as I stated earlier, it is it’s own movie.  Borrowing a few things here and there from the original, the tone remains fresh – an overall good balance between horror and comedy.  And in the end it was super enjoyable and fun, which is what you want when you go to the movies, right?  Oh and an extra blast o’ butter on your popcorn.  And maybe a box of Goobers.

Had they pushed the envelope even further with the craziness and violence (especially the department store climax), I honestly think Child’s Play would be my favorite horror movie of the year so far.  But as it stands, it still gave me a horror boner and I honestly (gulp) am looking forward to a sequel.  It doesn’t look like it blew away the box office, but it seems to have done just fine so I would be shocked if we don’t get more creepy-faced Chucky in the near future.  Now go cue up ‘The Buddi Song’ and sing along!  I said sing along, dammit!