Egads! It’s Paul from the stellar 1988 remake of The Blob! He’s looking right into the soul of your eyes, so try not to be too intimidated…..but that layer of The Blob over his peepers probably helps your chances! Oh great, sexy 1988 version of Shawnee Smith (and also Paul’s girlfriend in the movie) just walked by trying to distract you. Nice try, Shawnee! It’s gonna take a lot more than that……oh dear God – it’s Kevin Dillon’s mullet from the movie and it just distracted you! Curses! Paul wins. But also dies because The Blob just ate him.

Once in a while, an 80’s horror movie hidden gem appears on my radar that I never really knew anything about. I remember seeing something pop up that Scream Factory was releasing a 1988 film called Twice Dead (in limited form nonetheless), but I glazed over it like a donut (now I want a donut) and completely forgot about it. That is until I was perusing the free streaming site Tubi and Twice Dead appeared! So of course I watched it, and it is a delightful little underrated 80’s horror flick. And here are 4 reasons why you should go watch it now!

But anyway, you see that I have a lot of excitement for Todd Bridges being in it. But aside from that, Twice Dead is a true 80’s cheesy horror movie treasure that you should seek out now on Tubi. And a quick sidenote: Tubi has some amazing ‘hidden gem’ horror movies up right now, especially from the 80’s and 90’s. And now I’ll leave you with the poster art for the movie, which I think is pretty snazzy.

I don’t like to dance. But if I do dance, I usually end up doing some goofy shit like Ed Harris in Creepshow. And even though I’m as light on my feet as Jabba the Hutt wearing brick shoes, I do appreciate a good dancing sequence in a horror movie. Enter in the dancing sequence from Just Before Dawn, a 80’s slasher movie that is often brought up when talking about ‘underrated slashers’. The dancing however, is anything but underrated. Watch!

Now that’s a fun dance party in the middle of the woods when a bunch of hillbillies are trying to kill you! The problem with horror movies today, besides people yelling “Evil Dies Tonight!“, is that there aren’t enough bad dancing sequences to set up the demise of those bad dancers. But anyway, I will jump on the bandwagon as far as Just Before Dawn and tell you to go seek it out on Shudder right now, because it actually is a good underrated slasher movie. And feel free to get up and boogie when you watch it too!

If you’ve got the quarantine blues, I have come to the rescue with something that I found on eBay guaranteed to provide you with hours of fun!  And that something is………an official promotional Ghoulies hand puppet! 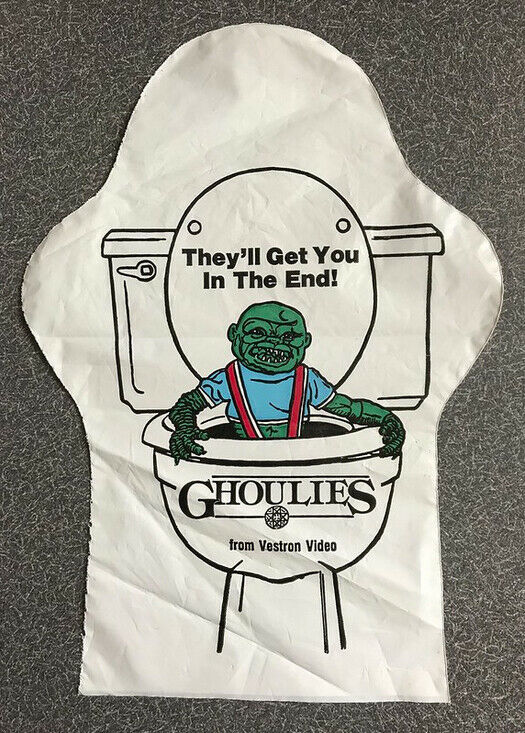 Did I say hours of fun?  Sorry, I’m a liar.  A few minutes is probably a little more accurate.  But, if you love Ghoulies – then this is the hand puppet for you!  Actually, kind of a lame hand puppet if you think about it.  Shouldn’t it just be of the green Ghoulie filling up the whole thing so you could move him around like an actual puppet?  But I digress.

It’s still fun and if you’d like to check out more info on it (there’s not really much more than what I told you though, honestly) – you can go HERE and get filled in.  Gotta admit though, the “They’ll get you in the end!” tagline was always pretty amazing.

I was racking my brain trying to come up with a good clip that freaked me out as a child that I could ‘Cher’ with you.  I thought about it long and hard, and then said to myself “Wait – I got you, babe!”  Yes, I came up with the perfect clip along with some terrible puns and references to Sonny Bono as well.  Because…..Sonny Bono is in the clip!  See how that all worked out?  And the traumatizing clip is from 1986’s Troll, a fun little horror romp not really for kids (although a lot of kids probably watched it).  Now let’s watch Sonny Bono morph into a bunch of plants!

I mean, the troll is kinda cute – even if he is kind of an asshole.  The make-up effects are pretty top notch (as were most in the 80’s), and if you’re into former husbands of Cher turning into shrubbery….then Troll is the movie for you!  Unfortunately for Troll, it would be it’s successor Troll 2 that would go on to live in infamy as the movie everyone would cheer for.  Any movie that has a seductive ‘corn-on-the-cob popcorn scene’ is sure to always win the prize.  But we shall never forget you, Sonny Bono.  You sacrificed yourself for the greater good of greenery.

Clowns freak me out.  Especially clown dolls – as my sister used to have one that sat in a rocking chair when I was younger that scared the shit out of me, thanks mostly in part to a little film called Poltergeist.  Hey – speaking of that movie!  There’s a 1988 Italian horror movie called Ghosthouse (written and directed by Umberto Lenzi) that pretty much blatantly steals the look of the clown from Poltergeist.  Issa ok though, because it’s still creepy as fuck AND has an accompanying ‘creepy as fuck’ song (thanks to composer Piero Montanari) to minimize the plagiarism.

Zoinks!  That clown made me wet myself.  He’s super, but the real champ of the scene and of the movie might be that song that pops up about every 2 minutes.  Ghosthouse was actually a first watch for me the other night, and I recommend it if you’re looking for a ‘so bad it’s good’ 80’s horror movie with no real plot.  Fun fact:  There’s a sequel called Witchery that stars both Linda Blair AND David Hasselhoff!  Yeah.  Chew on that for a minute.

Hurry, everyone!  Grab a Pilsner, crank up the Rammstein, and put another sausage on the barbie!  Sorry, that joke was the wurst.  As was that one.  But yes, let’s get German!  Because I have quite possibly my favorite thing I’ve found in a while for you in this post.  And that is:  The German version of the trailer for the 1988 killer slug movie…..Slugs!  I did a post about the regular American version of the trailer like a sucker last year, but this one is far superior.  Just watch and listen, and try not giggle and have a fit when the voiceover guy says “Sluuuuugs!” (echo, echo, echo)

Man, we’ve all been there:  Fed up with life, the world just constantly beating us down, and our former conjoined twin pushing us to act unruly and trash a hotel room.  Yeah, it pretty much happens every day – especially with cheesy stop motion effects courtesy of the 80’s.

But yes, I’m talking about the movie Basket Case.  A true ‘b-movie’ classic, not just in the form of 80’s horror – but cinema in general.  And one of the more enjoyably ridiculous scenes is when our favorite little wicker basket dweller Belial goes on a rampage and tears apart the hotel room that he and his brother Duane are staying in.  So please, stop what you’re doing and click the link below and enjoy.  Belial would have wanted it that way.

Work got you down?  Is your significant other farting too much in front of you?  Well, I’ve got just the thing to turn that frown upside down and shake your blues loose.  And that thing is…..a theme song!  Not just any theme song though – the theme song from the 1986 horror cult classic TerrorVision.  Put together by the LA rock band The Fibonaccis – it’s easily one of my favorite horror theme songs ever, as it captures the vibe of the movie perfectly.  Now click ‘play’ below on the Youtube clip and thank me later…….