If you hear those sleigh bells ringing and jing-jing-jingling, then it must mean that it’s time for you to break out your Silent Night, Deadly Night movie collection.  Don’t forget the one with Mickey Rooney though!  The one scene from this franchise that always sticks out to me, besides the infamous Garbage Day scene of course, is the sledding scene from the first entry into the series.  I remember watching this movie and this scene in particular when I was a kid and being scared, but of course now it’s just laughable.  I still enjoy it and feel it deserves a spot up on my holiday horror DVD shelf though without a doubt.  The clip below is actually a flashback scene from Silent Night Deadly Night 2, but that whole sequel is basically one big flashback anyway, so who cares.

Oh you sled bullies.  You got what you deserved.  Or at least one of you did.  The other just screamed like a girl.  This scene for me trumps the topless antler kill scene, but that’s up for a heated debate I’m sure.  Silent Night, Deadly Night is stupid and a definite slasher copycat (of which there were many around that time), that capitalizes off of yet another holiday theme.  But it’s fun, gory, and extremely cheesy as much as it is stupid, so that’s a win in my book.  A double feature DVD of the first two movies was just released and you can pick it up HERE and throw it down your chimney with care. 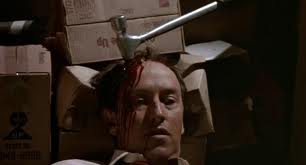