Pfffft.  Screw that new Ghostbusters movie coming out next week.  Ed and Lorraine Warren are the REAL ghostbusters and they’re all about busting up the fun that several nasty entities are having in the long awaited sequel to James Wans’ 2013’s stellar flick The Conjuring, appropriately titled The Conjuring 2.  The question on everyone’s mind when a horror sequel comes out is always whether or not it’s as good, or maybe even better, than the original.  And I’ve read some reviews calling this new incarnation ‘The best horror sequel ever!‘.  Well, as the great Harvey Keitel once said…..Let’s not go sucking each other’s dicks just yet.   END_OF_DOCUMENT_TOKEN_TO_BE_REPLACED

Good thing I’m in the market for a new overpriced 80’s horror movie keychain! Upon searching for keychains on Ebay for some reason, I stumbled upon something so rare…..so special…..so unnecessary…..that I just had to share the good news with you.  Brace yourselves as you gaze upon this promotional keychain from the 1987 horror/comedy, House II: The Second Story! 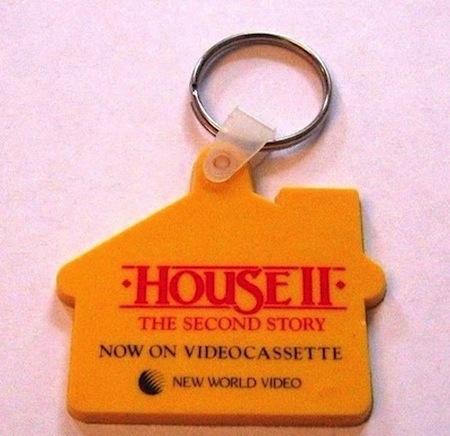 Oh it’s beautiful, and I’m actually having trouble finding the words to describe such a remarkable specimen.  And it’s even better if you like the color yellow! Now for those who don’t know, House II: The Second Story was a sequel to the entertaining first movie in 1986 called House.  Personally, I didn’t really like the sequel, but I’m sure there are fans out there who will clamor towards this keychain.  But (and it’s a big but), it’s going for $25 on Ebay right now.  There is the option to ‘Make An Offer’, so you have that going for you.  Head on over to the listing HERE and take a look.  I’ll stand back cautiously while the stampede settles down to claim this one……

Isn’t it just the worst when you’re a priest trying to perform an exorcism, and the demon you’re trying to exorcise turns into a hot lipstick wearing woman who proceeds to taunt and tease you with her tongue?

Amityville 2: The Possession is definitely better than it has any right to be, and maybe the hot girl’s tongue is one of the reasons.  I’m grasping at non-existent straws at this point, but let’s all watch that tongue in action below as Father Adamsky (James Olson) finds himself on the receiving end of it.

In my honest opinion, if you’re a looter douchebag with greasy hair that wears a tight t-shirt and gold chains with big dollar signs on them, you deserve to get your throat slit by a frisbee.  I should problem explain that sentence a little more in depth.

On this week’s Sunday Bloody Sunday, it’s time to enter the lovely world of Don Coscarelli’s Phantasm.  More specifically, Phantasm III: Lord Of The Dead, an above-average sequel that if anything is as enjoyable as it is ridiculous.  Case in point:  A wannabe thug gets his throat slit when a kid throws a frisbee at him after he breaks into the kid’s house with his wardrobe-challenged crew.  Don’t believe me?  Then feast your eyes on the clip below and prepare to see your first death by frisbee. 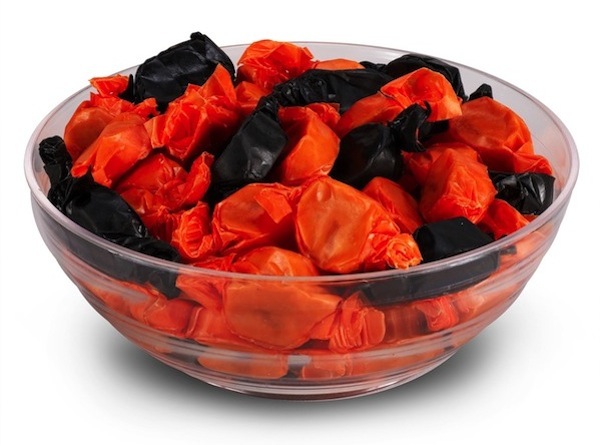 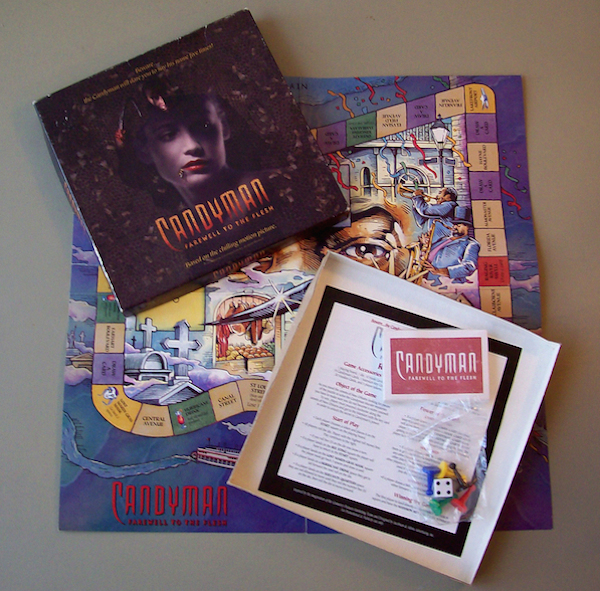 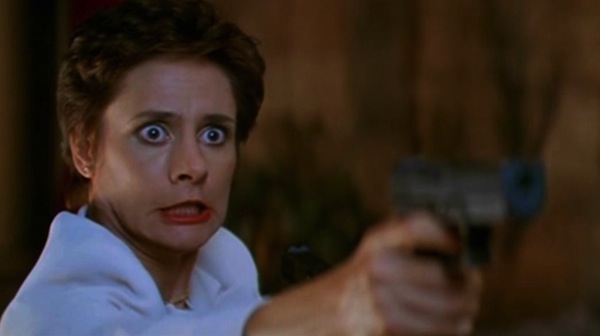 I’m not sure if the makers of 28 Weeks Later ever thought about giving away some promotional diapers at their screenings, because some of us could have used them during that opening scene.  No, I didn’t poop my pants everybody….but I do recall saying “Holy Shit!” after the 8 minute introduction was over.  Now, I’m not about to say that this sequel as a whole is better than Danny Boyle’s groundbreaking first from 2002, but the opening for 28 Weeks Later is easily on par with anything in 28 Days Later.

For those who have seen it, you know what I’m talking about.  And hopefully you share my enthusiasm as well.  If you haven’t seen it, the best I can do right now is provide a link from Youtube of the scene in full, but shown through the eyes of a camcorder.  You see, the copyright gods won’t let anyone put up actual clips from the movie, so this will have to suffice.  I can say that it’s some of the better bootleg footage out there in terms of quality, so we have that going for us.

Once the “In The House, In A Heartbeat” song kicks in, you know the rage-infested zombie shit is gonna hit the fan.  And when Don chooses himself over his wife and a random hungry kid, that’s when the reality of the situation sets in.  From there, we’re treated to a great zombie chase scene and then one of the best zombie water moments since Lucio Fulci’s infamous shark biting in 1979’s, Zombie.  This is how you do an opening sequence people, and luckily the rest of the movie didn’t dramatically fall off after this impressive little setup. So thank you 28 Weeks Later for your “Holy Shit!” moment and for almost (I can’t specify ‘almost’ enough) making me soil myself.  Now can we finally get 28 Months Later, please?

There’s nothing better in a mediocre horror sequel than a memorable nightclub massacre.  And luckily for 1992’s Hellraiser III: Hell On Earth, it had that going for it.  It’s that time again for the one thing that everyone likes doing on Sunday!  Nope, not talking about going to church.  You can do that on your own time.  I’m talking about another edition of Sunday Bloody Sunday!  The time of the week where I give you some of my favorite memorable death scenes from the days of horror movie past.

And in case the title of the post and my other mentioning of it hasn’t clued you in yet, I’m taking you straight to the Boiler Room nightclub from Hellraiser III.  It’s the best place to grind up on that special someone you have had your eye on, knock back a few shots of whiskey, and get slaughtered by Pinhead.  Maybe not necessarily in that order.  Yeah, Pinhead shows up to the Boiler Room and starts getting his groove on like it’s nobody’s business.  For him that includes somehow turning into a giant icicle that stabs a girl in the mouth and commanding a bunch of CDs to impale a DJ’s head.  Oh, and he also loves to laugh!  And what a hearty laugh he has.  So sit back, grab a cold one, and enjoy watching Pinhead do his thing: