Having the privilege of growing up in the 90’s, I was able to be a part of the “golden era” of hip hop which showcased a lot of different styles and pretty much had a little something for everyone.  And if you were like me and into horror at the time as well, then you remember the emergence of the hip hop style known as “horrorcore”.  One of the originators of that particular style was Brotha Lynch Hung, infamously known for killing a baby on an album and also known for his track “Locc 2 Da Brain” possibly being the reason a Colorado man killed three of his friends.  Happy Wednesday everybody!  But anyway, Brotha Lynch Hung has always carried that horror vibe with him and his new music video for ‘Meat Cleaver’ is no exception.  Surprise though.  He’s not just a gimmick.  He can actually rap his ass off when he wants to.  Check it out and be warned that the images and lyrical content are definitely NSFW:

I’ll admit – I still have Brotha Lynch Hung’s debut EP, 24 Deep in rotation on the iPod.  His new album entitled, Mannibalector, will be released on February 5th, just in time for Valentine’s Day!  And if you need to cleanse your soul after watching that video, here’s a pic of a cat with it’s face stuck in a piece of bread, which was all the rage last year. 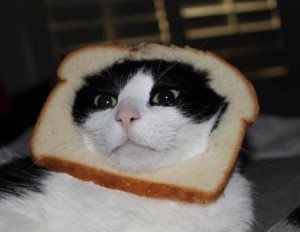 *please save your yeast jokes – i’ve heard them all before*