Oh my stars, it’s time for Sunday Bloody Sunday again! So let’s begin and say that I enjoyed the hell out of last year’s Candyman, even though I know some of you hated it. Yeah, you. I see you. But anyway, I think we can all agree (hopefully) that the art museum scene – where two characters justifiably meet their demise – was just a beautifully shot, and somewhat creepy scene. Need more convincing if you’re on the fence, check the link below!

Now, that’s some good carnage! I know it may be tame violence-wise in today’s horror world (The Sadness upped the ante on everything), but it’s some nice throat and ankle slashing nonetheless. The cinematography and style is one of the main things that draws me to this remake/reboot. Just a gorgeous horror film to admire from beginning to end. Ok, I’ll stop babbling now and buzz off.

I said his name 5 times looking into the bathroom mirror before I sat down to write this, so maybe I make it through to finish it….maybe I don’t. Anywho…..Candyman! And yes he can be pretty spooky in this sequel (yeah, it’s a sequel), which I know was a concern going in. Could it live up to the original Candyman from 1992?? But how will this movie be any good without Tony Todd?? What about the bees?? THE BEES!! I’m here to happily report that director Nia DaCosta has created a gothic and striking film, that not only pays homage to the original movie…..but elevates it to a new level that could (and probably should) garner sequels in this new Candyman universe.

END_OF_DOCUMENT_TOKEN_TO_BE_REPLACED

While everyone has a circle jerk for the new Halloween Kills trailer, I have been grabbing tissues for the new Candyman trailer that came out a few weeks ago. Oh you didn’t see it yet? Well take a look!

While I know the original 1992 Candyman, as well as Tony Todd’s performance, gets a lot of love….I still feel like that movie doesn’t get the credit it really deserves. And might as well also mention that I dug the sequel. Not that abomination of a third movie though. But anyway, back to the new Candyman! Directed by Nia DaCosta, with a screenplay by Jordan Peele among others – this new vision of our favorite bee-utiful hooked madman looks like it checks all of the boxes based off of the new trailer.

We’ve got some strong actors in this one (Yahya Abdul-Mateen II, Colman Jason Domingo), as well as some nice little cameos from the original movie. But the thing that really grabbed me with the new trailer (besides the fact that it didn’t give away too much like other recent…ahem….trailers) was that style and the visuals it gave off. This is one of those movies where I will probably go in with my expectations wayyyyyy too high. But I’ll leave them high for now (and leave them verrrrrry low for Halloween Kills) in hopes for the start of a new chapter in the Candyman franchise! Now let’s take a look at one more clip from the movie where Candyman gets his revenge on two morons that deserve it!

Ah ha! Just kidding. That was clearly from the movie Tommy Boy. Beeeeeees!!!!!!

Somewhere, Candyman is sulking…..possibly even drowning his sorrows in a delicious bottle of Mad Dog 20/20 as he reminisces about the good ol’ days when he actually could have had a successful horror movie franchise.  He was a great character.  He had a menacing deep (but oh so soothing) voice.  He also had a pretty great backstory.  And then in 1999, Candyman 3: Day Of The Dead happened and he disappeared like a fart in the wind.  But let’s not dwell on the bad times, let’s focus on the good times we had with Candyman!

On this week’s Sunday Bloody Sunday, we’re going back to my high school graduation year of 1995 for a little Candyman: Farewell To The Flesh action.  Now overall, I sort of dug this sequel and it had a few pretty memorable scenes.  One of them being when Candyman wants to party with Annie in her home and her husband Paul decides he wants in on the fun too!  Only problem is that when Candyman parties, he likes to gut people.  Sorry, Paul. 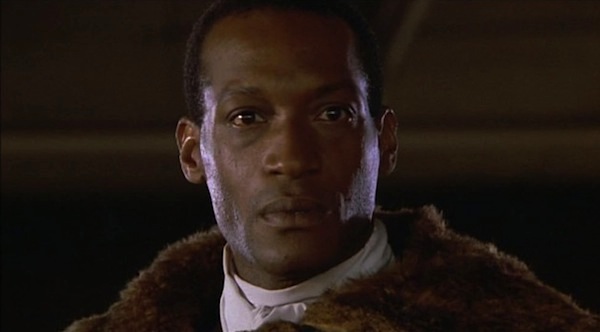