Let me just get this out of the way real quick:  1983’s, The Dead Zone, is a great movie.  And Christopher Walken and his thick, lustrous hair are a big part of it.  Ok ok, I guess the source material by Stephen King and directing of David Cronenberg aren’t too shabby either.  But I want to talk about one scene specifically this week on Sunday Bloody Sunday, and it’s a scene that still makes me cringe every time I watch it.  The dreaded SCISSOR SCENE!

You want to squirm in your seat?  Just watch the moment in The Dead Zone when Johnny Smith (Walken) is able to detect through his psychic abilities that Deputy Dodd is a murderer.  Yes, watch as Deputy Dodd is cornered and makes that fateful decision to end his own life.  But not with a gun.  Not with a rope or by jumping out a window either.  Deputy Dodd is creative everybody! He wants to go out like no one else ever has:  by slamming his head into a sharp pair or scissors of course.  Now even though they don’t show the scissors actually going into his skull, it’s the sheer brilliance of the set up and then seeing the aftermath that is so effective and cringe-worthy.  Deputy Dodd really gave future movie suicides something to aim for.  Salute. 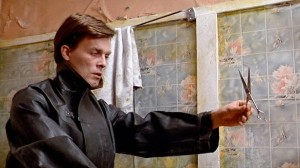 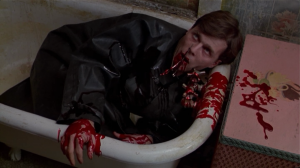