So strange because I was just thinking about the 2006 slasher See No Evil the other day and was applauding it my mind for the nastiness that it was.  No holds barred (there’s a wrestling joke in there somewhere) kills were the highlight, and WWE wrestler Kane was just the right guy to pull it off.  Well, if you appreciated it for the throwback slasher that it was too, then you’ll be happy to know that 7 years later now, it looks like we’re getting a See No Evil sequel! 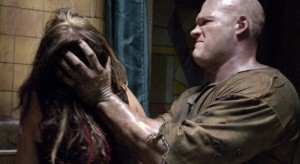 *here, you need a breath mint*

Not only is the sequel coming, but there is a bit of a surprise as to who the directors (yes, plural) are going to be.  Fresh off of their success with American Mary (read my review HERE), the Soska Sisters are going to be behind the camera and the synopsis goes a little something like this:

“Kane will return as the reclusive madman Jacob Goodnight, who rises from the dead in the city morgue after his killing spree at the Blackwell hotel and goes after a group of medical students who fight to survive.”

I’m down for some city morgue carnage at the hands of Kane.  Stay tuned or more on this sequel as production will start in the fall.  Some more plucked out eyeballs will be on tap I’m sure, and maybe even another ‘death by cell phone’ victim?