Living in Los Angeles has it’s perks.  The constant sunshine.  The guy who dresses up like Jesus and walks the streets of Hollywood.  And now we exclusively get Rob Zombie’s Great American Nightmare!  An insane music/haunted house hybrid starting on October 10th and running through November 2nd at the Pomona Fairplex (I mean FEARplex) in Pomona, California.  And if the teaser trailer below is any indication, the haunted houses themselves (Haunt Of 1000 Corpses, The Lords Of Salem Total Blackout, and The Haunted World Of El Superbeasto 3D) are going to be craaaaaaazy!

Looks top notch from that footage and if you add to that the different music acts that are going to be playing each night (Kottonmouth Kings, Ozomatli, Andrew W.K., and Rob Zombie himself), this event looks like a force to be reckoned with this Halloween!  If you are in the LA area, you can go HERE for more info about lineups and tickets. 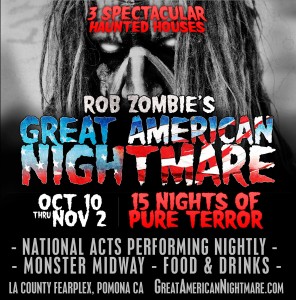 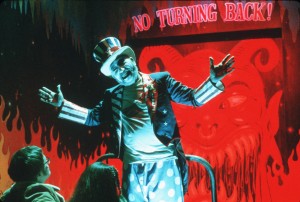