In 2007, a little Spanish horror film called [REC] took the found footage concept, flipped it around and put it’s stamp right on that sweet horror ass. The movie itself was kind of like walking through a haunted house – tense, scary as shit, and it set up what would be two sequels in the established franchise. 2009’s [REC]2 improved even more in my opinion on the original and 2012’s [REC]3: Genesis abandoned the found footage concept less than halfway through, suffering a lot because of it.

Coming this year is the 4th and final film in the [REC] series called [REC]4: Apocalypse and from the first trailer that just popped up, there is good news and bad news:

We’ll start with the elephant in the room and say that the biggest piece of bad news is that the found footage concept is seemingly gone for good.  No clue why they would do that to be honest.  When the original [REC] came out, I didn’t feel it was trying to piggyback off of The Blair Witch Project or anything. It was fresh and did it’s own thing.  So I’m kind of at a loss after watching the trailer that it’s been abandoned.  Because of that, [REC]4 just looks like another zombie movie, only this time it’s set on a boat. 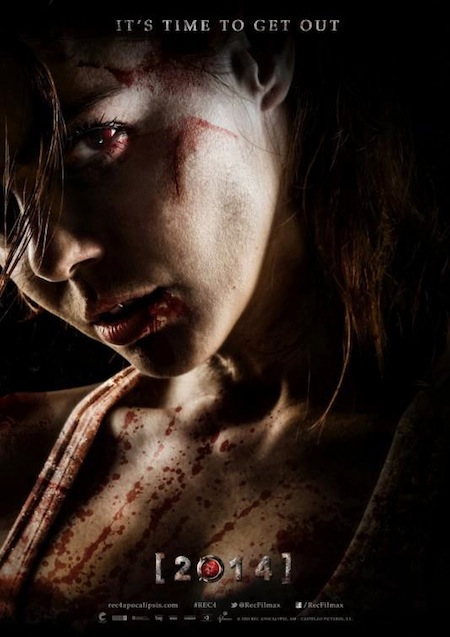 Which brings me to a few good things about the trailer.  The boat setting is kind of interesting, because there’s a claustrophobic feel to it which usually works in a horror movie.  Director Jaume Balaguero is back and so is actress Manuela Velasco, who reprises her role of reporter Angela Vidal from the first film.  But I have a sinking suspicion that those few good things might dwarf in comparison to the found footage abandonment.  We’ll see in the end when [REC]4: Apocalypse (ugh….I kinda hate the Apocalypse addition in the title) hits theaters later this year!