I’ve been on a Funko figure collecting kick lately (still waiting for a reasonable price for the unmasked Jason Voorhees from Comic-Con), so I was deliciously delighted to see that our favorite head-spinning vulgar mouthed possessed girl Regan from The Exorcist is getting the Funko treatment!  Said to be released in October, just in time for Halloween, this figure is pretty visually striking.  I vote for a variant version with the spinning head btw.  You can track down one of these Regan figures for a good price (around $10-12) up for pre-order on Ebay and a variety of websites.

Who knew that 2 1/2 inches could be so fun?  Just give it a try ladies.  I’m talking about Funko’s new 24-piece horror movie figure set that comes out on October 3rd!  Yes, now you can have all of your favorite horror characters in 2 1/2 inch vinyl form starting then at any of your local stores that sell Funko products.  Ahhh – but there’s a catch.  They come in “Mystery” boxes so you’ll never know which one you’ll get!  Frustrating to say the least, but also kind of fun.  Sort of like when you would spend 50 cents on a pack of baseball cards over and over again to get that Ken Griffey Jr. rookie card.  Suckers.

Which of your favorite horror characters are part of this collection you ask? How about: Billy (Saw), Ash (Evil Dead), Captain Spaulding (House Of 1000 Corpses), Pennywise (It), Sam (Trick ‘r Treat), and of course the usual suspects – Jason, Freddy, Leatherface, and Michael Myers.  They even have a version of the Friday The 13th video game Jason that was recently released at Comic-Con from NECA! You can view more at Funko’s site HERE, and ask around in your town to see if any of your stores are carrying them.  Let the overspending begin! 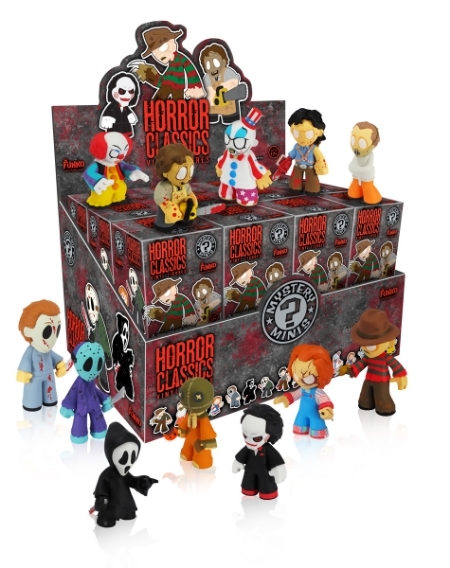