Nothing gets me going more than some gorgeous gore in a horror movie.  And I guess that ‘gorgeous’ could definitely be a word used to describe Nicolas Winding Refn’s odd little movie The Neon Demon.  The women are gorgeous.  The style of the film is gorgeous.  And the scene where a model vomits up an eyeball is…..you guessed it – gorgeous!

Welcome to Monday Bloody Monday, where I must warn you that the following clip has spoilers galore if you haven’t seen The Neon Demon.  Not that it would really matter much, since even if you have seen the movie you probably don’t know what the hell is going on anyway.  I dug this movie more than I thought I would though.  Some will call it artsy crap.  Others will praise the ambition of it.  The clip below of the ending pretty much sums up The Neon Demon at it’s best, and might make you rethink ever wanting to eat an eyeball.

Few moments in horror movie history leave me in a state of shock and awe.  And no, the entire Gingerdead Man movie is not among these moments.  But there is one moment that always comes to mind, and that would be the ‘trailer scene’ in The Hills Have Eyes remake from 2006.

Welcome to Monday Bloody Monday where I am indeed going back to the scene that still makes me feel uneasy when I watch it.  Quite possibly the most brutal scene ever in a bigger budget horror movie.  I realize this was a Hills Have Eyes remake and there was a somewhat similar scene in the original Wes Craven offering, but I literally feel the need to take a shower after watching the remake version.  Watching Pluto and Lizard (great names for some mutants btw) terrorize this family with rape and murder tendencies makes my skin crawl.  Oh – and that gunshot to the Mom?  Whew.

Thanksgiving is only three months away!  So it’s time to get your electric turkey carver ready to slice through that delicious succulent bird.  But wait – maybe you should practice first just to make sure your skills are up to par so you don’t embarrass yourself in front of your family when you start cutting.  And what better way to practice than on a demonically possessed arm?  Right, Natalie from the 2013 Evil Dead remake?

Yeeesh.  That was realistically gruesome.  There were a lot of moments in the Evil Dead remake that made me say “Holy Shit!“, and this was definitely one of them.  Natalie was pretty defiant of cellar dwelling possessed Mia and just kept cutting and cutting that arm until it eventually fell off.  Mission accomplished, Natalie!  Except it really wasn’t, and you still turned into a demon and died a horrible death.  Gotta love her gusto though and she gets kudos for giving it the old college try! 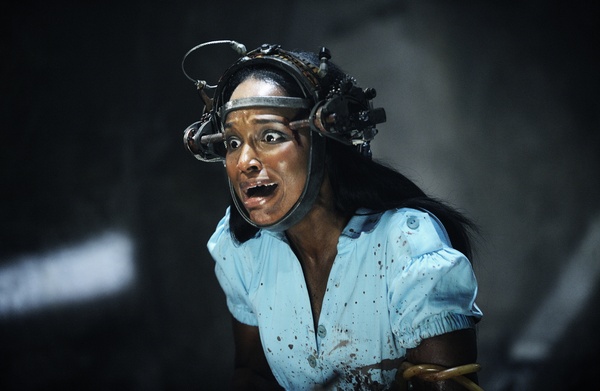 What’s the best way to get you out of your Monday funk?  By watching 15 minutes of pure over-the-top gory awesomeness from 1983’s ‘so bad it’s good’ alien schlockfest, The Deadly Spawn.

Now if you’ve never seen The Deadly Spawn, I’m hear to tell you that you’re completely missing out.  What boggles my mind is that I remember watching this on basic TV in the afternoon, with full gore intact, when I was about 10-years-old.  If you have a fetish for seeing old people get attacked and bitten by baby aliens with jagged teeth, then today’s your lucky day.  Make sure to check out the clip around 7 minutes in if you want to see that madness unfold, but I highly recommend watching the whole 15 minutes.

Do you have problems with your scalp itching?  I know that the easy solution if you do would be to go to the store and grab a bottle of Head & Shoulders.  But why do that, when you can just call on serial killer Frank Zito to get rid of your scalp ENTIRELY!

Welcome to Sunday Bloody Sunday and if you’ve recently eaten, I have to warn you that the clip below is pretty gruesome and may cause nausea.  If you didn’t see the 2012 Maniac remake, then you missed out on little Elijah Wood stepping into the role of a scalp-happy killer who has some Mommy issues to boot.  Quite a few cringe-worthy violent scenes in this one, but for me the scene below takes the cake.  Watch with caution, as Frodo does some nasty damage to one of his unlucky victims.