You know, I was just talking to my friend the other day and told him that there is an extreme shortage of semen-filled turkey basters in horror movies nowadays.  Luckily for me, I can go back and revisit the solid 2016 horror/thriller flick Don’t Breathe to get my fix.

Now the first thing that comes to mind besides mouthwash after I watch that clip, is how fucking good this movie was.  To me, Don’t Breathe lived up to the hype even though it’s not technically a full-blown horror movie.  A sequel seems to be coming, but if you ask me they should just leave it alone.  And speaking of coming, I do wonder if another turkey baster will make it’s way onto the big screen when the sequel does hit.  We can only dream.

Quick!  What’s one of the best ‘creature feature’ horror movies to come out in the last 10 years?  If you just shouted out Splinter, then you win!  You actually win nothing, except for some much needed self-esteem for the day possibly.  But yes, one of my favorite ‘creature feature’ movies in some time is Splinter, a 2008 offering that introduced us to actor Shea Whigham (Boardwalk Empire) and also introduced on how to cut off someone’s arm with a box cutter and cinder block.

To be completely honest, it takes a lot in a movie to make me wince like a child.  And this scene definitely makes me do that.  It could possibly be the sawing back and forth on the arm with the box cutter…..or possibly the final blow with the cinder block that gets to me. Either way, it’s an effective gross-out scene and one that deserves multiple viewings if you’re into torturing yourself.  This most likely did wonders for box cutter sales at Home Depot btw.

Sometimes you’re watching a horror movie and something happens where you just kind of pause and say “ummmmm…..”.  That’s the best way to describe it when I was about 11 years old and my Dad brought home the Clive Barker helmed, Rawhead Rex.  It’s your standard ‘demon resurrected to bring hell on earth’ type story with a guy running around in a pretty bad costume and makeup taking out the townsfolk left and right.  Oh, and he also stops by the occasional priest to piss on him for a baptism ritual too……

Ummmmmmm……yep – he just pissed on that priest.  And the priest liked it.  And what a stream on that Rawhead Rex, huh?  Impressive.  I remember arguing with someone later in life that this scene actually did occur.  Now thanks to the wonders of Youtube, it’s proven!  Rawhead Rex has some decent gore and I do highly recommend reading the original story by Clive Barker to get a better sense of what they were going for here with this ho-hum of a horror movie.  This is one film that would definitely benefit from a remake by the way.  Unfortunately, this cult classic is not available on DVD, unless you want to pay a ridiculous amount, but we can only hope that one day soon we’ll be able to view this wonderful pissing display in high definition Blu-Ray!  So here’s to you Rawhead Rex, and your monumental piss……. 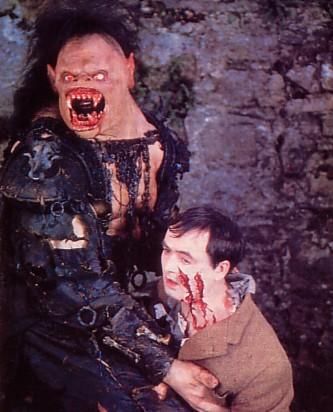