Clowns freak me out.  Especially clown dolls – as my sister used to have one that sat in a rocking chair when I was younger that scared the shit out of me, thanks mostly in part to a little film called Poltergeist.  Hey – speaking of that movie!  There’s a 1988 Italian horror movie called Ghosthouse (written and directed by Umberto Lenzi) that pretty much blatantly steals the look of the clown from Poltergeist.  Issa ok though, because it’s still creepy as fuck AND has an accompanying ‘creepy as fuck’ song (thanks to composer Piero Montanari) to minimize the plagiarism.

Zoinks!  That clown made me wet myself.  He’s super, but the real champ of the scene and of the movie might be that song that pops up about every 2 minutes.  Ghosthouse was actually a first watch for me the other night, and I recommend it if you’re looking for a ‘so bad it’s good’ 80’s horror movie with no real plot.  Fun fact:  There’s a sequel called Witchery that stars both Linda Blair AND David Hasselhoff!  Yeah.  Chew on that for a minute.

Ok, so I’m a little biased because my friend did this – but, if you love the movie Pieces (and if you don’t, kindly get the fuck off my blog) then you should be entertained by the following compilation of some of the best (and worst) scenes in the movie.  All you need to know is that the ‘tennis scene’ is included.  Oh – and get down to the funky sounds of Ween at the beginning and end of the video too!  And you better like this, or you are nothing but a bastarrrrrrrrrrd!!!!!

There have been a few horror movies throughout my life that have come highly recommended to me.  So naturally I get comfortable, watch them, and for the most part I end up highly recommending them to someone else.  I like to pay it forward.  But sometimes, one of those highly recommended horror movies ends up stumping my brain to the point that I don’t really see what all of the fuss is about.  Such was the case when I first sat down with the 1994 Italian horror/comedy Cemetery Man aka Dellamorte Dellamore (which is a much better title in my opinion). 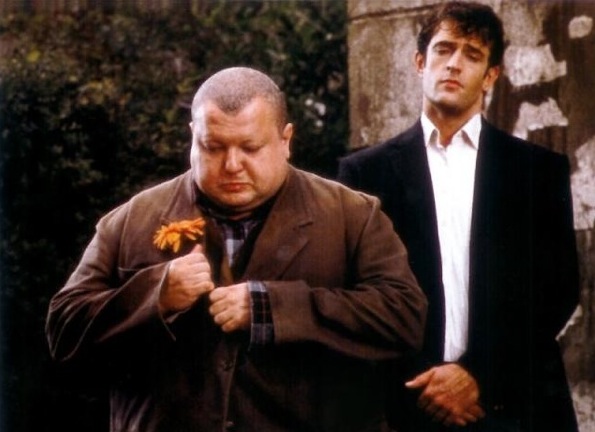 Now don’t go grabbing your torches and pitchforks just because I didn’t quite get into Cemetery Man the first time I watched it.  I know it has a strong cult following, and I know it has Rupert Everett in it and he’s a well respected actor.  And honestly, I love the horror/comedy concept – but considering I saw Dead Alive before I saw Cemetery Man, I’m thinking that my expectations may have been a tad high since Dead Alive blew me away as far as horror comedies go.  Rat monkeys and karate priests are hard to top.

Considering the amount of horror crap I’ve watched though in the 15 some odd years since my first viewing of Dellamorte Dellamore (again, I like this title more), I guess I should kind of be ashamed that I haven’t rewatched it since.  Fear not though!  I do want to revisit it, and want to revisit it soon.  I just need some motivation.  Something that I can hold onto. Something that stands out.  Something round and supple that will definitely make me want to watch this movie again……..

Who needs a college football championship game when you have the amazingly bad Demons 2?  Yes, last night I revisited the sequel to one of my all-time favorite horror movies ever, 1985’s Demons.  Oh sure, Demons is not Academy Award level cinema by any means – but it’s fun, gory as hell, and has a great soundtrack.  And it has Bobby Rhodes.  I hadn’t watched Demons 2 in a long time, so imagine my pleasant surprise that I was inspired enough the morning after to write this post.

Hilarious bad dubbing aside (as with most Italian horror movies), Demons 2 has an arsenal of ‘so bad it’s good’ moments.  And thankfully after watching this movie again, I now have an arsenal of content for my site in the near future.  It’s clear from the get-go, that Demons 2 is the red-headed stepchild of Demons.  And it’s ok with that, which makes it even better.  Oh I’ll talk about the dog transformation scene, the baby demon scene, and even the reemergence of actor Bobby Rhodes as a gym instructor at a later date – but today it’s all about Sally’s demon transformation scene:

Oh lord.  Now you know you can’t help but laugh when that prop head of Sally pops up.  This sequel pretty much tries to follow Demons beat for beat, as Sally’s transformation (especially the teeth part) mimics Carmen’s from the original almost to a tee.  The effects are definitely cheaper this time around, but it works because the movie itself is, well…..cheap.  God bless the 80’s though, because it was acceptable to be and look cheap back then, especially in horror movies.  Therein lies the charm, my friends.  And Demons 2 is full of it.  Charm that is. 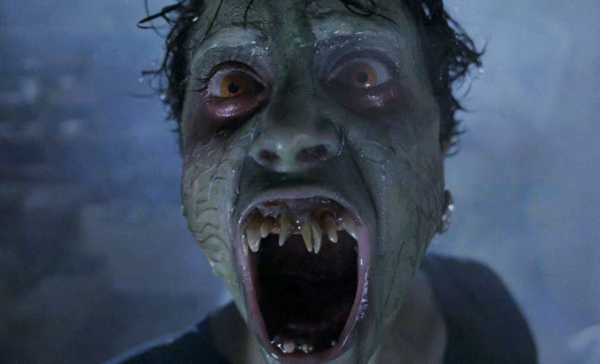 I’m sure a handful of you out there are dealing with a nasty hangover and are a little sick from a wild weekend of booze-filled partying.  But hopefully, none of you are vomiting up your intestines after being possessed by a creepy priest who likes to play a wicked version of a staring contest.

Welcome to Sunday Bloody Sunday and if you’ve haven’t guessed yet, I’m spotlighting the infamous ‘intestinal puking’ scene from Italian horror legend Lucio Fulci’s 1980 gorefest, City Of The Living Dead.  If you’ve seen the movie, then you know what you’re in for.  If you haven’t seen it and have just finished eating, I’d advise you to wait about 45 minutes – kind of like if you were about to go swimming.  Fun fact before and after you watch the clip:  Actress Daniela Doria, who plays Rosie Kelvin, actually vomited sheep entrails during the filming of this scene.  Enjoy!