Even though today is the 30th anniversary of A Nightmare On Elm Street 3: Dream Warriors, I’m going to go against the grain and do a post about A Nightmare On Elm Street 2:  Freddy’s Revenge!  Well, more specifically a little moment that doesn’t get talked about much.  No, not Jesse dancing in his room – but the moment when his little sister is eating a box of Fu Man Chews cereal and playing with the toy fingernails that are inside.

Have you ever watched that part of the movie and thought to yourself “Hmmmm…..I really wish I could own a replica box of Fu Man Chews!“.  Well……..now you can!  And how about a bonus replica of the toy fingernails too?

Ok, I will have to admit that this is pretty cool.  Especially since it comes with the fingernails too.  Now – if you want to try and get your grubby hands on this, you can do so on eBay right HERE.  If you’re located in the US, the shipping is a bit of a letdown – but in the end you’ll definitely probably be the only one in your crew with a replica box of Fu Man Chews cereal.  Now here’s the scene of Jesse dancing just for diehard Jesse dancing fans out there who just can’t get enough. 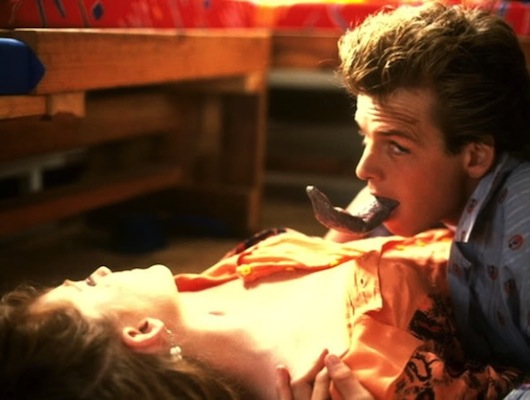