You know the moment.  You’re in a wheelchair and about to get lucky in an 80’s horror movie, when all of a sudden instead of climaxing with a hot girl – you’re rolling down the stairs with a machete stuck in your head.  It can be a cruel, cruel world and Mark from Friday The 13th Part 2 found that out the hard way unfortunately.

Mark is the guy in the horror movie that you want to root for.  He’s nice.  He has a disability that doesn’t deter him.  And he’s about to make whoopee with Vickie which makes you want to root for him even more.  Now if you know the horror rules, you don’t have sex in a horror movie because you’re probably going to die.  But Mark didn’t even get to have sex!  Oh the horror!  It was terrible.  It was unthinkable.  It was downright mean.  So let’s watch it and enjoy his pre-sex demise!! 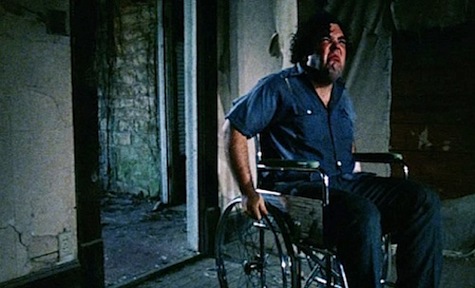