Spiders.  The one thing that will make me scream like a little girl and cower behind a chair in an instant.  Spiders are also the culprit of making me swerve off the road while I’m driving and almost flip my car when I see one dangling in front of my face.  As a big guy, it’s definitely not my proudest moment when it happens.  So it comes as no surprise of course, that one of the horror movie scenes that gave me the creeps growing up and still does, is from the 1987 Martin Sheen voodoo flick, The Believers.

The scene in question involves Helen (Jessica Halliday), who plays Martin Sheen’s love interest in the movie and has also been given the old voodoo hex by the voodoo clan unfortunately.  All because Sheen is sticking his nose where he shouldn’t.  So Helen develops this new nasty sore on her cheek that is irritated and it keeps getting bigger and bigger.  Then the unthinkable happens.  Prepare to itch yourself for a while after watching this clip:

Now remember, The Believers was made back in the 80s, so those are real spiders folks.  No CGI critters here (I’m looking at you Urban Legends: Bloody Mary).  And even without the infamous spider scene, this flick still holds up today and has some great performances and other creepy scenes to boot.  But our arachnid friends take center stage here, and they deserve all of the praise and more than they’re receiving in this write-up.  Speaking of giving praise, how about we give some to that crazy, white-eyed, dancing voodoo guy from the movie as well.  Go crazy, white-eyed, dancing voodoo guy!  It’s your birthday! 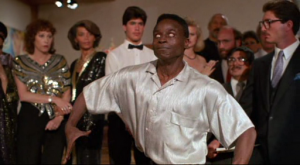