Do you want to know the definition of a cheesy B-movie?  Look no further than 1983’s blood-soaked alien invasion romp, The Deadly Spawn.  It’s gross.  It’s sick.  It’s hilarious.  It’s everything that I miss about 80’s horror movies.  And now, courtesy of the good folks at mondotees.com, you can possibly own the groovy soundtrack to this gem on some spiffy vinyl if you’re lucky enough to grab one this Friday.  Following in the footsteps of their previous vinyl offerings of the Maniac and The Beyond soundtracks (got The Beyond, but missed out on the Maniac one), Mondo will be releasing a limited number of The Deadly Spawn albums on Friday at an undisclosed time. 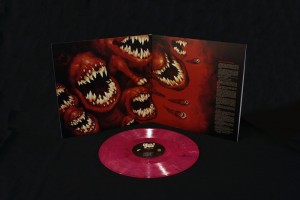 And the really cool part, besides the great artwork on the cover and inside the gatefold, is that a limited number of the vinyl will be a special color to coincide with the color of the aliens in the movie!  It’s a crapshoot though because you won’t know if you’re getting the special colored vinyl until you crack it open. Now if you haven’t ever seen the actual movie, I will HIGHLY recommend you check it out and it’s even up on Youtube, so there are no excuses!  But since the focus here is on the vinyl release announcement, why don’t you grab your bowl of early morning cereal and chomp away to the sounds of Michael Perilstein’s end theme to The Deadly Spawn: