A small disclaimer:  I will do my best to not use stereotypical Australian puns in this review of the Australian outback horror movie, Wolf Creek 2.  In an attempt to not conform to the usual misconceptions that Australia is all about big knives, Fosters beer, kangaroos, and dingos eating babies – I will take the high road throughout this review.  Oh, crikey!  Looks like I’ve already slipped up.   END_OF_DOCUMENT_TOKEN_TO_BE_REPLACED

It’s taken awhile, but funding has finally come through for the long awaited sequel to the 2005 Australian indie horror flick, Wolf Creek.  No dingos eating babies here – even more frightful because John Jarratt is reprising his role as the Outback looney, Mick Taylor, in Wolf Creek 2 and is ready to throw some more hapless victims on the barbie.  Yes, the character who Quentin Tarantino praised highly (who he even put in his new movie Django Unchained btw) and the man who made you cringe with the term “head on a stick” is back!  But seriously though, can we talk about that scene real quick?  I’m squirming in my chair right now just thinking about it – easily one of creepiest and most effective kills ever in a horror movie. 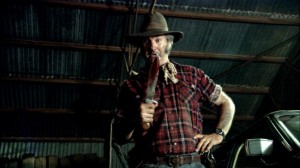 Quick synopsis for the sequel:  Lured by the promise of an authentic Australian holiday, backpackers Rutger, Katarina and Paul visit the notorious Wolf Creek crater. Their dream Outback adventure soon becomes a horrific reality when they encounter the site’s most infamous local, the last man any traveler to the vast and isolated region ever wants to meet, Mick Taylor.

I’m definitely down for more Mick Taylor carnage and I’ve got to give it up to him as well for creating one of the creepiest laughs ever in a movie (sorry Max Jenke from the Shockeresque movie, The Horror Show).  I think when we watch his character in Wolf Creek though, we all think the same thing:  What the hell happened to Crocodile Dundee (Paul Hogan)?  Oh yeah – that whole tax thing.  Crikey!  Anyway, let’s hope that Wolf Creek 2 keeps pushing forward so we get it sooner than later. Now let’s all rejoice in this news with some stereotypical Australian 80’s pop music!