Well, just when I thought that The Asylum’s new upcoming shark/tornado hybrid Sharknado was on the top rung of the crazy idea ladder, along comes the Al Qaeda zombie movie, Osombie.  Yes, forgot going to see Zero Dark Thirty.  You can now get your Osama Bin Laden fix in zombie form! 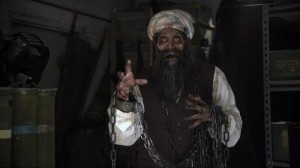 *can I borrow some deodorant?*

Here’s a breakdown of the ridiculousness:  The story follows Dusty, a yoga instructor from Colorado (of course), who is out to save her crazy brother Derek. He believes Osama Bin Laden is still alive and is convinced when Osama rises from his watery grave and creates an army of zombie terrorists. After Dusty aligns with a team of NATO special forces, they vow to stop Osama and his band of undead Al Qaeda munchers before they infest the rest of the world!

Classic.  Still not convinced yet though?  Then click your mouse down below and watch the teaser trailer for this madness.  Surprisingly decent production value from what I can tell, at least for a movie that’s about undead terrorists.  If you’re looking for a good gag gift or the perfect “fuck you” stocking stuffer, this gem comes out on December 11th!