Few things say ‘horror’ more than disco dancing.  Yes, it can be terrifying.  Yes, body parts can be flying to and fro.  And sometimes it can even make me want to get up and boogie, which if you’ve seen me dance then you know that can be extremely unsettling and scary.  Just know that if it rains, it might be because I’m getting my groove on.  But anyway, disco dancing was as much a focal point of the 1980 Jamie Lee Curtis led slasher Prom Night as was Lou’s decapitated head.  Oops – sorry.  That was a 36-year spoiler there.

The bottom line:  We might need more disco dancing in horror movies nowadays.  Clearly shit isn’t working too well lately, so why not throw some bell-bottoms in?  Let’s all get some inspiration for that and watch the disco inferno burn up below:

How do you make up for cheesy disco music in a subpar slasher movie?  Why you give the audience an amazing beheading – that’s how!  Throwing Leslie Nielsen in there doesn’t hurt either.  Yep, this week on Sunday Bloody Sunday, I’m talking about the 1980 whodunit horror flick, Prom Night.  And I’m specifically talking about the super awesome decapitation of our favorite ugly high schooler, Lou.  Yep, not only does he get his noggin lopped off backstage, but then it gets a post-slashing grand entrance onto the floor so everyone can see!  Pretty memorable as far as beheadings go, so give it up for Lou everyone…..he’s clearly shoulders and shoulders above everyone else. 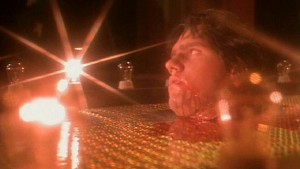 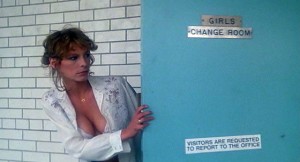