Now the new upcoming horror flick Sinister already had me giddy in anticipation from the first trailer and the positive reviews that were popping up online.  But now comes the new red band trailer and I’m seriously considering running down to the local theatre and camping out in line before the October 12th release date like a Twihard fan.  Don’t believe me?  Judge for yourself and watch how a horror movie trailer should be put together:

The ominous music.  The effectiveness of not using any vocals (except for the screaming kid in the box).  And the shot of the family being hung on the tree at the end might be one of the creepiest things I’ve seen in a while.  My only knock is that it’s a red band trailer and only because Eric Walkuski from JoBlo.Com dropped the F bomb in a quote from his review of the movie.  Well here at DirtyHorror.Com, we encourage everyone to drop an F bomb, even though we’re not a red band site and there are no age restrictions because we’re all big boys (and girls) here.  FUCK.  See?  Anyway, go support Sinister and the horror genre on October 12th! 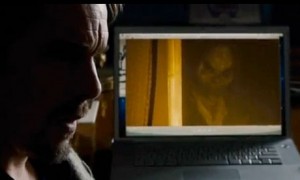 is this webcam chat as awkward for you as it is for me?