Oh Asylum – you really do love giving us ridiculous rip-off movies and also movies about poorly CGI’d mega piranhas.  Yes, over at the American Film Market in Santa Monica this week, a poster was unveiled for The Asylum’s new “mockbuster” movie….and that movie is none other than Sharknado!  The company that has blessed us with such gems as:  Snakes On A Train, Transmorphers, Mega Shark Vs. Crocosaurus, and Paranormal Entity 3: The Exorcist Tapes, is about to unleash our worst fear upon us.  A tornado made entirely of sharks.  Hey, it could happen people. Mother Nature is a mad scientist. 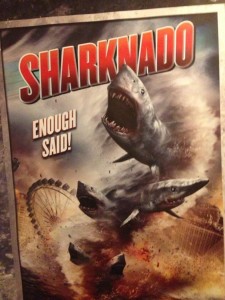 Oh crap!  From the poster it looks like they’re gonna take out the Santa Monica Pier! Too close for comfort for me…..So how do these sharks morph into a tornado?  Glad you asked.  According to The Asylum:  When a freak hurricane swamps Los Angeles, thousands of sharks terrorize the waterlogged populace. And when the high-speed winds form tornadoes in the desert, nature’s deadliest killer rules water, land, and air! Great…..so we have to deal with land sharks too?  I think we all know how this will turn out. 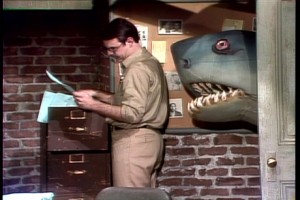 *doesn’t anybody ever f*cking knock anymore?*