DVD/Blu-ray distributor Scream Factory just keeps bringing the goods.  I’m still trying to catch up with their most recent releases (The Video Dead/Terrorvision combo is on deck), and now they drop the cover art for their upcoming July 30th release of John Carpenter’s The Fog.  Scream Factory really gives the horror fan everything and more with these releases when it comes to the cover art, bonus features, and overall transfer of the films.  No word on the extras for The Fog yet, but I’m sure they’ll be rolling in (get it?  bad fog pun).  Keep in the loop on their Facebook page HERE and check out the nifty cover below: 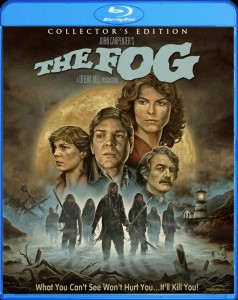 In previous posts, I’ve given you the news that DVD/Blu-ray provider Scream Factory is bringing some forgotten, but heavily requested horror titles your way such as: TerrorVision, The Video Dead, and The Nest.  With no indication that they’ll be slowing down with the output, 6 more titles were just announced, and for most, it will be their first time on Blu-ray ever!  Here are the newbies to join the Scream Factory family:

Aside from Day Of The Dead (which will have new special features attached), none of the other movies have seen the Blu-ray light of day.  Which equates to no double-dipping for the loyal horror fan like you!  I myself, can’t wait to pick up The Burning and The Howling.  Never did ever see Lifeforce and remember my Mom yelling at me to turn it off one Halloween night because there were abundant boobs on the screen.  Watch out for these Scream Factory titles in the near future and be sure to pick up some of the previously announced releases (TerrorVision, The Video Dead, The Nest, Prison, Death Valley) in the next few months!

*i don’t usually do this on the first date*