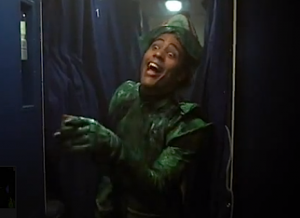 But let’s get on to the topic at hand, or should I say, sleight of hand.  David Copperfield appears in the movie playing a role that he was made to play – a magician.  He blows our mind by inserting a cigarette through a quarter and then magically makes some peanuts appear in Jamie Lee Curtis’ hands because she has peanuts envy of course.  I mean seriously – a cigarette through a quarter!?  This man holds nothing back!   END_OF_DOCUMENT_TOKEN_TO_BE_REPLACED