If you’re like me and grew up on 80’s horror, then maybe you remember a little weekly running event on the USA Network called Saturday Nightmares? Every Saturday night, you could stay up and watch your favorite horror movies with the nudity edited, but usually the gore staying primarily intact.  It would usually be a double feature, and in between those features you could sometimes catch a little horror short to pass the time before diving into movie number two.

Thanks to Youtube this morning, I stumbled upon one of those aforementioned horror shorts called The Dummy.  I haven’t seen this since my days of convincing my parents to stay up to partake in Saturday Nightmares, and it was definitely a nice trip down memory lane.  Now before you watch, just know that this was a student film and it’s from 1982, so the quality is a bit sketchy. The music is great though and it’s got a creepy killer ventriloquist, so you really can’t go wrong there, right?  On top of all of that, it’s been confirmed that this short inspired the story of Chucky from the Child’s Play franchise.  Keep that in mind when you’re watching! 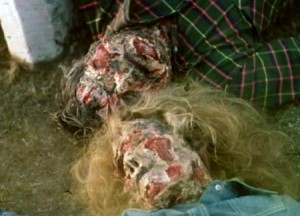